Vince Biegel will play next season under the RFA tender. The restricted free agent linebacker signed his deal with the Dolphins today (per the team’s Twitter account). Biegel will earn around $2.13MM next season. 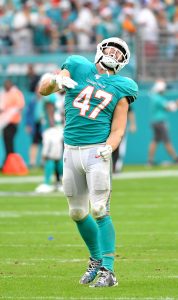 We heard back in January that the two sides were working on a long-term, and Barry Jackson of the Miami Herald tweets that that was indeed the case. However, the two sides couldn’t agree to terms, resulting in today’s transaction. Biegel was initially tendered at his original-round level by the Dolphins back in March.

The 2017 fourth-round pick spent his first two professional seasons in a backup role for the Packers and Saints. Prior to the start of the 2019 regular season, he was traded to Miami for Kiko Alonso, and he proceeded to have the best season of his career. The 26-year-old established career-highs across the board, finishing with 59 tackles, 2.5 sacks, and one interception in 15 games (10 starts).