Weeks after the deal was reported, the Falcons announced that they have agreed to terms with Todd Gurley. However, Gurley has yet to take/pass his physical, Adam Schefter of ESPN.com tweets. 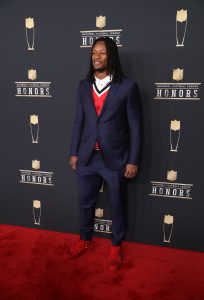 Given Gurley’s medical history, that’s more than just a formality. Gurley hasn’t looked the same since his late-2018 knee injury – last year, the two-time All-Pro averaged just 3.8 yards per carry for the Rams and just 6.7 yards per reception. Before that, Gurley managed 40 all-purpose touchdowns between 2017 and 2018 while averaging 4.8 yards per tote.

Still, there’s a virtual handshake deal in place. Gurley is set to earn $11MM in total this year, with $7.5MM coming from the Rams, $6MM on the Falcons’ books, and an offset of $2.5MM. With that, Gurley will be one of the three highest-compensated running backs in the NFL.

In Atlanta, Gurley will replace the recently released Devonta Freeman. The University of Georgia product will be backstopped by Ito Smith and Brian Hill in his homecoming.

No one’s exactly sure what to expect from Gurley after his shaky season, but he stayed largely healthy in 2019 and he’ll have another year of recovery under his belt. If Gurley returns to his old form, or even 80% of it, the Falcons could have one of the most dangerous offenses in the league.