The Giants have spent lots of time researching and talking to Oregon quarterback Justin Herbert, Ian Rapoport of NFL.com tweets. Needless to say, it would be an absolute stunner if the Giants targeted Herbert, but RapSheet says it’s a note to file away this week. 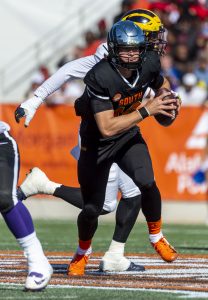 Herbert has had lots of FaceTime conversations with head coach Joe Judge, but that could just be a part of their “exhaustive” draft prep for their top pick. Frankly, it’s hard to imagine any scenario where the Giants would draft Herbert with Daniel Jones already in place. NFL.com’s Mike Garafolo (on Twitter) speculates that the Giants could be playing the long game, using this opportunity to do their homework on him in case he becomes available at some point down the road.

The Giants probably won’t be in the mix for Herbert, but other QB-needy teams are taking a hard look at him. That list, of course, includes the Dolphins at No. 5 overall. For months, they’ve been heavily connected to Alabama star Tua Tagovailoa, but more and more insiders are hearing that they’re actually obsessed with Herbert. That may also explain the Giants’ deep dive on Herbert – an attempt to sweat the ‘Fins into trading up.

The Chargers are also a possibility for Herbert, but it doesn’t sound like they’re willing to trade up from No. 6 to get him.