Haason Reddick‘s fifth-year option will be turned down by the Cardinals, according to ESPN.com’s Jeremy Fowler (on Twitter). With that, the former first-round linebacker is on course for free agency after the 2020 season. 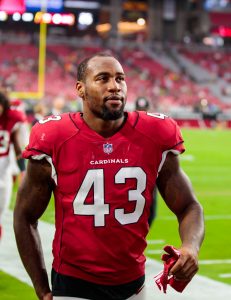 Reddick came into the league with considerable buzz. Teams were enamored with his athleticism and versatility; scouts saw a player with the potential to star at inside linebacker or dominate on the edge, depending on the need. Unfortunately, Reddick was never able to get his footing in either area. All of the different coaching and scheme changes didn’t help matters either.

The former No. 13 overall pick has perfect attendance over the past three years, but still has just 7.5 sacks to his credit. He was bumped from the starting lineup midway through last year and saw his playing time dwindle as the year drew to a close. Even though the Cardinals took their time on this one, few expected Reddick to have his 2021 season guaranteed for injury.

Reddick will play out his final year with $2.3MM in salary and a $4.3MM cap hit. This could be an opportunity for him to cash in as a free agent, but that’ll only be possible if he gets enough snaps.

Looking ahead, the Cardinals are set to replace him with a younger and even more versatile player in Isaiah Simmons. The Clemson product and combine darling may have the ability to feature as both an edge rusher and a safety.

As shown in PFR’s fifth-year option tracker, Colts safety Malik Hooker is the only player still in limbo.