So far this offseason, Devonta Freeman hasn’t been able to find a deal to his liking. If that doesn’t change between now and the fall, the running back is willing to sit out the entire 2020 season, according to NFL.com’s Ian Rapoport (on Twitter). 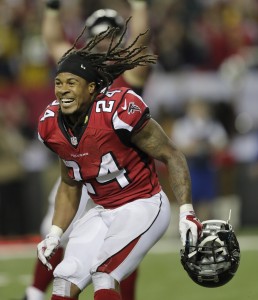 In theory, the 28-year-old could easily walk away – he’s earned upwards of $24MM and he’s got plenty of spectacular performances to look back upon. Retirement, however, is not a consideration for Freeman at this time, Rapoport hears.

Freeman’s drawn interest from the Seahawks, Jets, and Eagles since being released by the Falcons. And, just recently, Seattle tried to sell him on a one-year deal worth $3MM – he said no, prompting Pete Carroll & Co. to turn to Carlos Hyde. The Eagles may still be a fit for Freeman, Rapoport posits, despite the presence of Miles Sanders, Boston Scott, Corey Clement, and the newly-signed LeSean McCoy. Ditto for the Jets, who are looking to fortify the group behind Le’Veon Bell. Ultimately, it’ll come down to dollars and Freeman would rather stay patient than slash his price here in May.

Last year, Freeman appeared in 14 games for the Falcons but averaged just 3.6 yards per tote on 184 carries. Meanwhile, Football Outsiders placed him just 41st among 43 running backs in success rate. In 2020, Freeman is hoping to redeem himself and get closer to the form he exhibited in 2016, his last Pro Bowl campaign. In that season, Freeman ran for 4.8 yards per try and scored 13 all-purpose touchdowns.