The Seahawks are moving fast. Shortly after a report surfaced of a final offer going out to Devonta Freeman, the Seahawks will pivot to Carlos Hyde. The six-year veteran agreed to terms with the team on Friday, and the deal became official on Thursday afternoon, per a club announcement. 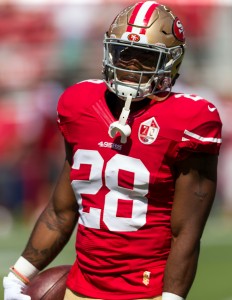 With Rashaad Penny‘s status uncertain, the Seahawks moved aggressively to bring in a veteran this week. They offered Freeman a deal that would have paid him $3MM in base value, with another $1MM available via incentives, but the longtime Falcons starter didn’t bite. Instead, Hyde will soon head west on a deal that will pay him up to $4MM, per Rapoport (on Twitter). It is not yet certain if the base value for Hyde — who also surfaced as a Seahawks target this week — will equal what Seattle offered Freeman.

Hyde is coming off his first 1,000-yard season. Since his 49ers exit, though, the former second-round pick has not enjoyed much stability. Hyde signed with the Browns in free agency in 2018, but the team traded him to the Jaguars. Jacksonville cut bait after the ’18 season, leading Hyde to the Chiefs. Kansas City then traded him to Houston, where he became the Texans’ primary ground-game option.

The Seahawks still appear intent on keeping Chris Carson as their primary back, despite the fumbling troubles that plagued him last season, and invested a first-round pick in Penny two years ago. But they now have some insurance in Hyde, who will turn 30 in September. Such insurance may be necessary. Penny starting the season on the PUP list is a concern, Brady Henderson of ESPN.com tweets.

Hyde’s decision may drive the Eagles — who were also interested in Hyde — to ramp up talks with Freeman. Both the Jets and Eagles are believed to be in the mix for Freeman.

Another piece of fallout from this deal could mean Marshawn Lynch returns to retirement. Earlier this month, Seahawks GM John Schneider said another deal with Lynch remained possible. Seattle re-signed Lynch after both Carson and Penny went down late last season. The popular Seahawk played in the team’s regular-season finale and both playoff games.