New Jets quarterback Joe Flacco has been medically cleared to start throwing again, according to Manish Mehta of the Daily News (on Twitter). 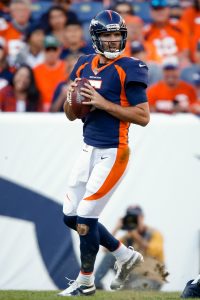 The team also believes that the veteran will be on course for contact by early September. In the meantime, he’ll be able to toss the ball and prepare for the 2020 season.

The Jets inked Flacco to a one-year deal on Friday, bringing him in as a veteran backstop to starter Sam Darnold. Flacco will be at the ready in case Darnold misses more time and he also figures to serve as a mentor to the soon-t0-be 23-year-old. Earlier in his career, Darnold had a similar dynamic with Josh McCown.

The Jets’ first choice for the QB2 role was Andy Dalton, but the Cowboys beat them to the punch. After that, Flacco stood as the most attractive option. Or, at least, the most attractive and realistic option. Cam Newton is still waiting for the right opportunity and he would have cost significantly more than Flacco. The ex-Broncos QB and former Ravens star signed on for just $1.5MM, though performance bonuses could take him up to $4.5MM. Outside of those notables, May’s free agent QB market included the likes of Blake Bortles, Drew Stanton, 2019 Jet Trevor Siemian, and Matt Moore, who was not high on their list despite his relationship with head coach Adam Gase.

With Flacco in the fold, the Jets will have some decisions to make in the QB room. Currently, they have David Fales, fourth-round pick James Morgan, and former Cowboys Day 3 pick Mike White on the roster.