It sounds like Marshawn Lynch could stick around for another season. The veteran running back told ESPN that his agent has been in contact with the Seahawks. 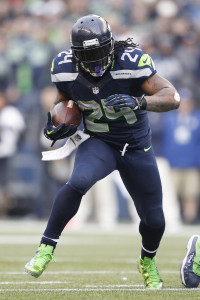 “Well, it’s almost on that expect the unexpected,” Lynch said (via Curtis Crabtree of ProFootballTalk.com). “But just as far as right now, what I do know is, (I’m gonna) keep it solid. My agent has been in talks with Seattle, so like I said, we’ll see what happens. If it works out and I get back up there, it is what it is.”

Following two seasons with the Raiders, Lynch returned to Seattle towards the end of last season. Thanks to the Seahawks’ depleted running back corps, the 34-year-old had an opportunity to play, and he collected four touchdowns on 30 carries in three games (including two postseason contests).

Following that performance (which also included an unsightly 2.23 yards-per-carry), Seahawks head coach Pete Carroll hinted that Lynch could return in 2020.

“We’ll see. Never say never,” Carroll said in February. “I’m not going to rush him back to offseason, that’s for sure. That’s never been one of his strengths.”

The Seahawks are currently rostering six running backs, but only three of them have any NFL experience. Chris Carson is expected to be ready for the regular season, but Bob Condotta of the Seattle Times notes that former first-rounder Rashaad Penny may have to start training camp on the PUP.