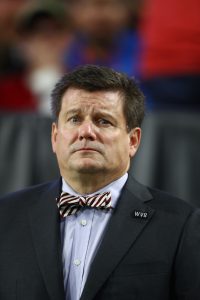 Bidwill is the first of the NFL owners known to have contracted the coronavirus. He was hospitalized recently. However, the 55-year-old owner’s symptoms have subsided, according to the team. Bidwill is expected to be released from the hospital this weekend.

The team believes a weeks-long stay on the East Coast resulted in Bidwill contracting the virus. Bidwill, who is in a Rhode Island hospital (per Katherine Fitzgerald of the Arizona Republic), has not had any contact with Cardinals coaches or players since the virtual offseason began.

Bidwill joins Sean Payton, Von Miller and Ezekiel Elliott as high-profile NFL figures who have contracted COVID-19. As of mid-June, around 10 teams had seen a positive coronavirus case. Given the spikes occurring in most states since then, that number may well be higher as we enter mid-July. Teams remain on track to report to training camp July 28, though several key issues remain unresolved.

Joining the family-owned organization in 1996, Bidwill has run the Cardinals since 2007. His father, Bill Bidwill, died in October 2019.