Martavis Bryant Unlikely To Play In 2020

Earlier this month, we heard that Martavis Bryant was set to apply for reinstatement. Over the weekend, Tom Pelissero and Ian Rapoport of NFL.com (on Twitter) learned that the former Steelers and Raiders wide receiver has not actually submitted the paperwork. Bryant still hopes to play but RapSheet says there’s “more work to be done” and, therefore, it seems unlikely that Bryant will play this season. 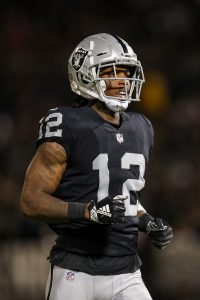 Bryant, 27, has been seeking treatment for mental health issues, including ADHD. He’s been in hot water with the league office on multiple occasions over the years, including the 2016 season was that was wiped out by a substance-abuse ban. Last year, he “seriously angered” the NFL during his appeal process and he’s been critical of Roger Goodell‘s handling of players with mental health issues in the past.

At last check, Bryant was taking drug tests to prove his sobriety. In order to be reinstated, he’ll have to test clean, and continue to test clean over time.

The Raiders gave up the No. 79 overall pick in the 2018 draft to acquire Bryant from the Steelers. In eight games, Bryant caught 19 passes for 266 yards. Previous to that, Bryant notched 17 touchdowns in just 36 contests for the Steelers, while averaging 15.2 yards per catch. He’s a talented deep threat, but he’ll have to get his affairs in order before he can retake the field.

6 comments on “Martavis Bryant Unlikely To Play In 2020”