Aaron Rodgers‘ heir apparent is officially in the fold. On Wednesday, the Packers officially announced the signing of quarterback Jordan Love. 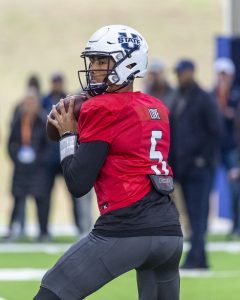 The Packers were rumored to be interested in the Utah State QB before the draft, but it was still a surprise to see them trade up to take Love in the first round. The Packers gave up pick No. 136 in the fourth-round to move up four spots, grabbing the promising youngster at No. 26 overall. In accordance with his slot, Love will earn $12.38MM over the full life of the four-year contract and collect a $5.56MM signing bonus.

Meanwhile, no one’s quite sure of what this means for Rodgers.

“I’m not going to talk about all that we talked about, but he was … let’s just say surprised that they went in that direction,” Rodgers’ predecessor Brett Favre said in May. “I think he’ll play somewhere else.”

With Love signed, the Packers have just three stragglers to go. Here’s the full rundown of their draft class, via PFR’s tracker: