The rumors about the Big Ten nixing fall football preceded the conference following through with a landmark change. One week after it finalized a fall 2020 schedule, the conference voted to not play that slate, David Jesse, Chris Solari and Chris Thomas of the Detroit Free Press report. The Big Ten announced the decision Tuesday.

While the Big Ten has become the first of the Power 5 conferences to call off football in 2020, it plans to pursue a spring football season, NJ.com’s James Kratch reports. This would be an axis-shifting move, though other smaller conferences have put such plans in place already. 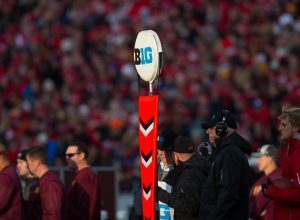 The NFL has yet to budge on its annual draft window. Earlier this summer, the league was not expected to move the draft from its traditional late-April date. But with the Big Ten producing dozens of draftees annually, the NFL will now have a dilemma.

One of the major conferences’ seasons may not be completed by the time the draft happens — a scenario that has not occurred since the 1960s. The CBA allows the NFL the power to push the draft back as far as June 2. Any additional delay would require another NFL-NFLPA bargaining session.

A few first-round prospects from Big Ten schools have opted out of the season to prepare for the draft. Tuesday’s announcement will induce many others to do so, with a spring season presenting immense risk to players on track to play NFL football in fall 2021. Prospects who were hoping to use the 2020 season as a springboard to better draft status may also be forced to skip a spring slate.

Other college conferences may follow the Big Ten’s lead. The Pac-12 was the second league to announce it would only play conference games. With COVID-19 still wreaking havoc on the NCAA landscape, it would certainly not be a surprise to see the Pac-12 — which also discussed a spring setup earlier this summer — follow the Big Ten in postponing its season. This would put the ACC, Big 12 and SEC to seminal decisions.

As far as the coronavirus-reshaped 2020 NFL season, that remains on course. While the Big Ten pulling the plug on fall football could be interpreted as an ominous sign for the league, the NFL has fewer obstacles to navigate than college conferences en route to Week 1.