The 2021 NFL draft may feature a player with one season of college experience. Miami defensive end Gregory Rousseau informed coach Manny Diaz he is opting out of the 2020 season, per Susan Miller Degnan of the Miami Herald (on Twitter). 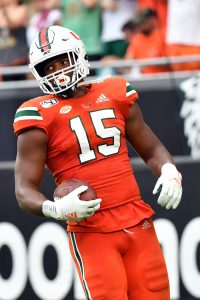 Rousseau broke out last season and landed on the draft radar. He registered 15.5 sacks — tied for the third-most in ACC single-season history — and a conference-best 19.5 tackles for loss. Technically, Rousseau saw action as a true freshman but not enough to use up a year of eligibility. As a result, he stands to go from his redshirt-freshman season to the NFL draft — in all likelihood.

The 6-foot-7 pass rusher would be eligible for the draft, due to being out of high school for three seasons. ESPN’s Todd McShay rated the Miami talent as his top edge defender prospect, with Rousseau coming in at No. 13 overall.

After Virginia Tech cornerback prospect Caleb Farley opted out, others are following suit. While the NFL season will be defined by the coronavirus, the pandemic is wreaking greater havoc at the college level. The Power 5 conferences have all changed their schedules, with lower-level football leagues either postponing or cancelling seasons. It will certainly not be a surprise if more first-round prospects pass on playing this season.