The Cowboys are moving on from Ha Ha Clinton-Dix quickly. After signing the veteran safety to a one-year deal in March, Dallas will release him, Todd Archer of ESPN.com tweets. 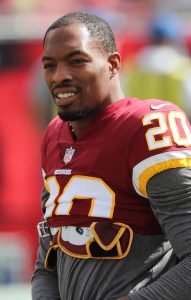 Clinton-Dix signed for a guaranteed $2.5MM, so this move will tag the Cowboys with a bit of dead money. It will, however, free up $1.75MM in cap savings. While this marks the first release of Clinton-Dix’s career, the former first-round pick may well move to a fifth team before what would be his seventh NFL season.

Expected to be a starter alongside Xavier Woods, Clinton-Dix evidently did not justify the modest salary commitment. He signed a one-year deal with the Bears last year and started 16 games for their No. 4-ranked scoring defense. Now. Clinton-Dix joins Gerald McCoy as 2020 Cowboy signees jettisoned before the season’s outset.

While this could accelerate the Earl Thomas-to-Dallas hype, the Cowboys are said to be split on the All-Pro safety. Mike McCarthy, in particular, was not believed to be on board — as of late last month — with bringing in Thomas. But Jerry Jones has not ruled it out, and the owner/personnel czar certainly would have the final say. Indeed, NFL.com’s Jane Slater tweets this does not necessarily mean a Thomas signing is imminent.

The Cowboys have used Woods and Jeff Heath as their safety starters over the past two years, doing so amid constant rumors about upgrades to the position. Their most notable effort came when they offered a second-round pick for Thomas in 2018. After Heath’s defection to Las Vegas, Dallas signed Clinton-Dix. The Cowboys have former Giants draftee Darian Thompson, 2019 sixth-round pick Donovan Wilson and rookie UDFA hopeful Luther Kirk in their safety stable currently.

A former Packers draftee, Clinton-Dix has started 90 career games and made the Pro Bowl in 2016. Pro Football Focus graded him as its No. 19 overall safety last season. Green Bay traded Clinton-Dix to Washington at the 2018 deadline, and he signed with Chicago the following March. He will likely head to another city for work soon.