More tough news for the Vikings, as head coach Mike Zimmer announced Monday the team will be placing veteran linebacker Anthony Barr on injured reserve. He’s got a torn pec. 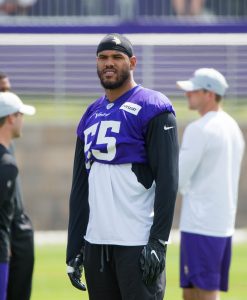 It’s the last thing this Minnesota team, which has looked awful through two games, needed. Since it’s a torn pec, Barr will be done for the season. The ninth overall pick of the 2014 draft, Barr has been with the Vikings his whole career. He’s one of the leaders of the defense, and made the Pro Bowl four straight seasons from 2015-18. In his absence, rookie fourth-round pick from Oregon Troy Dye will be counted on to play a more prominent role.

Luckily for Barr, he just locked himself into a huge contract last offseason. In March of 2019 it was reported he was leaving to sign a deal with the Jets, only for the UCLA product to change his mind at the last second and return to Minnesota on a five-year, $67.5MM contract.

Last season he had 79 tackles, 1.5 sacks, four passes defended, and an interception in 14 games. Minnesota’s usually stout defense has struggled mightily so far, and it’s not hard to see why with all the departures. Star pass-rusher Danielle Hunter is on injured reserve, and key defensive contributors like defensive tackle Linval Joseph, defensive end Everson Griffen, and cornerback Trae Waynes all left in free agency.

It’s looking like it could be a long year for Zimmer’s unit, and they’ll be significantly shorthanded for their pivotal Week 3 meeting with the Titans. Barr, who will turn 29 in March, is signed through the 2023 season.

5 comments on “Vikings LB Anthony Barr Done For The Season”