The Cardinals have signed veteran safety T.J. Ward to their practice squad, per a club announcement. With injuries throughout the position group, it might not be long before Ward is called up to the varsity squad. 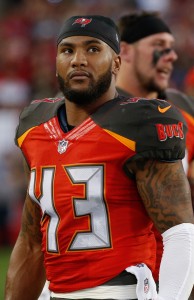 The Cardinals’ safety group has been ravaged by injuries. Jalen Thompson is on IR, Budda Baker is still healing up from thumb surgery, and Chris Banjo is questionable due to a hamstring pull, which could put Ward on the field for this week’s game against the Panthers. The Cardinals may also have to get creative by moving versatile rookie linebacker Isaiah Simmons to the secondary.

Ward played three seasons with the Broncos, serving as one of the anchors for Denver’s No Fly Zone Super Bowl-winning secondary. He missed the 53-man cut in Vance Joseph‘s first year as the team’s head coach — now, he’s set to play for him in Arizona.

Ward, 33, has not played since the 2017 season. In his last stop with the Buccaneers, Ward registered 30 tackles and three passes defended in 12 games (five starts). Pro Football Focus wasn’t particularly fond of his performance, ranking him 58th among eligible safeties.