The Jets have stumbled to an 0-4 record to start the 2020 season and have undeniably looked like the worst team in the league. As such, New York has a great chance of finishing the season with the No. 1 overall pick, which means the club would be in position to land a potentially generational QB talent in Clemson signal-caller Trevor Lawrence. 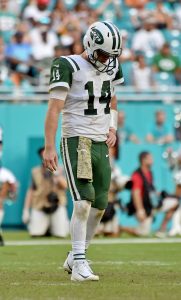 Of course, that would leave Sam Darnold — the No. 3 overall pick of the 2018 draft — on the outs. Plenty of fans and writers alike have connected the dots and have wondered if the Jets would consider trading Darnold, and if so, what the club could expect in return.

Last year, the Cardinals traded Darnold’s draftmate, QB Josh Rosen, to the Dolphins in exchange for second- and fifth-round selections. A few executives tell Adam Schefter of ESPN.com that the Jets could expect similar compensation if they elect to move Darnold.

Although Darnold has certainly shown more flashes of promise than Rosen had when he was traded, the Jets’ passer has not come close to living up to his draft status. Of course, there are plenty of organizational, coaching, and talent issues outside of Darnold’s control that have led to his struggles, but his overall body of work has left much to be desired.

Still, there are a few clubs that might not be drafting high enough to select a future franchise quarterback that will nonetheless need a talented young passer sooner rather than later. Those clubs include teams like the Colts, Bears, and Saints, all of whom could theoretically make a play for Darnold.

Matt Miller of Bleacher Report also names the Steelers as a great fit, and he believes Pittsburgh should trade a second-round pick plus a player or two to land the USC product (Twitter link). Unsurprisingly, Mark Kaboly of The Athletic says the Steelers have no interest in Darnold, though he does believe Darnold or a player in his situation will ultimately be the type of passer that Pittsburgh will need to target to adequately replace Ben Roethlisberger.

Any Darnold trade would not happen until after the season, and if he continues to struggle, the Jets’ price would continue to drop, especially since rival clubs would see Lawrence as an inevitability for Gang Green at that point. Plus, an acquiring team would need to make a decision on Darnold’s fully-guaranteed ~$24MM fifth-year option for 2022 at some point in May, which would be just one more complicating factor.

Darnold will miss the Jets’ game against the Cardinals today due to a shoulder injury. Over the first four games of the season, he has completed under 60% of his passes and has thrown three TDs against four interceptions.