The Seahawks are adding a familiar face to their RB corps. Per Tom Pelissero of the NFL Network, Seattle plans to sign Alex Collins to its practice squad. 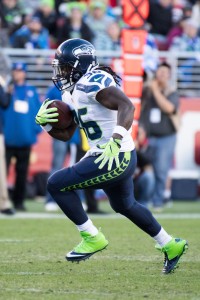 As Brady Henderson of ESPN.com observes, Collins is beginning COVID-19 testing today. However, because the league’s protocols require six negative tests over six days before a new player can enter a team’s facility for the first time, Collins will not be available for the Seahawks’ game against the 49ers this weekend (Twitter links).

Seattle selected Collins, an Arkansas product, in the fifth round of the 2016 draft. He was waived prior to final cutdowns in the summer of 2017, and the Ravens quickly scooped him up. At the time, it looked like a coup for Baltimore, as Collins piled up nearly 1,000 rushing yards on a healthy 4.6 YPC average and entered the 2018 season at the top of the club’s RB depth chart.

Unfortunately, Collins was not as effective in 2018 as he had been the year before, and he also missed six games due to injury. He was then arrested in March 2019 on marijuana and handgun charges, and the Ravens waived him promptly thereafter. He has been looking for his next NFL opportunity ever since.

Now healthy and eligible to play — his legal matters have been resolved and he served a three-game suspension while in free agency limbo — Collins will look to resurrect his career in the same place it began. And considering that the Seahawks’ top running backs are all dealing with injuries, Collins could see game action soon.

He has generated a fair amount of interest over the last year or so. He worked out with the Bills and Packers in December, the Seahawks and Dolphins in January, and as Pelissero tweets, he visited the Lions earlier this week. Still only 26, Collins profiles as an intriguing midseason pickup.

6 comments on “Seahawks To Sign Alex Collins To Practice Squad”