Cardinals safety Jalen Thompson will be sidelined for “a week or two” with an ankle injury, according to defensive coordinator Vance Joseph (Twitter link via Kyle Odegard of the team website). This is the same ankle that Thompson injured in the season opener, so the Cardinals will be keeping a watchful eye on his condition before clearing him to play. 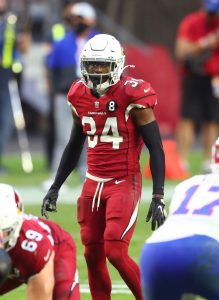 Thompson’s leg twisted on a play near the end of the second quarter against the Seahawks on Thursday night. After being helped off the field, the safety had to be carted to the back. Deionte Thompson — who saw significant snaps during Jalen’s first absence — took over from there. That’ll likely be the game plan on Sunday against the Patriots, though veteran Chris Banjo may also pitch in at free safety.

The Cardinals snagged Thompson in the fifth-round of the 2019 supplemental draft and immediately put him to work. After starting in nine of his 15 games last year, the Cardinals planned to install him as a full-time starter in 2020. But, thanks to the injuries, he’s seen a grand total of 169 snaps across four games.

The Cardinals, sans top free safety, will look to advance to 7-4 on Sunday against the Pats. After that, they may or may not have Thompson on the field against the Rams on Dec. 6.