Ravens tight end Mark Andrews has tested positive for COVID-19, as Adam Schefter of ESPN.com tweets. Andrews, a Type 1 diabetic with elevated risk, has ben ruled out for Tuesday night’s game against the Steelers. 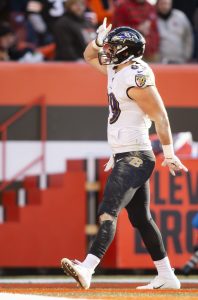 Andrews is now the eleventh Ravens player to test positive for COVID-19 and the 20th player to hit the reserve list, which also includes players who have been exposed to the virus. In addition, ten Ravens staffers have tested positive, putting the team under a great deal of scrutiny. For now, the plan remains for the game to be played on Tuesday, according to Jay Glazer of FOX Sports (on Twitter). The Ravens intend to have their players return to the facility on Sunday night for conditioning, marking their first in-person gathering in days.

The league already postponed this game twice. A third postponement may lead the league to one of their two contingency plans — either rescheduling to “Week 18” or, if there are more cancelations, a historic 16-team playoff bracket.