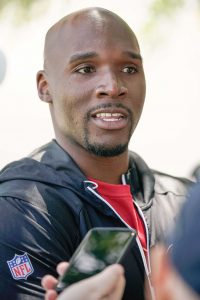 Ryans takes over for former DC Robert Saleh, who has agreed to become the Jets’ new head coach. Many believed that Saleh would try to take Ryans with him to the East Coast, but the 49ers didn’t want to let Ryans get away. Given the work he has done with LBs Dre Greenlaw, Fred Warner, and Azeez Al-Shaair, the young assistant was a natural fit for the role.

McDaniel, meanwhile, takes over for Mike LaFleur, who will serve as Saleh’s OC in New York. McDaniel has worked with Kyle Shanahan at multiple stops and his profile has grown larger over the years. He was a candidate in the Browns’ most recent head coaching search and the Dolphins were also eyeing him as an OC candidate in this cycle.

One comment on “49ers Hire DeMeco Ryans As DC, Mike McDaniel As OC”