The Jaguars’ next GM will have a tremendous opportunity to help rebuild the franchise. However, owner Shad Khan says that he will continue to have final say over the roster, draft, and all personnel matters. 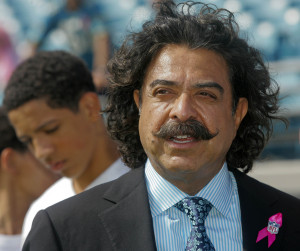 “I kept the roster control and…the general manager candidates, I’ve been talking to them, that for the immediate future I’m going to keep the roster control,” Khan said (via Michael Lombardi of The Athletic). “And I want the coach to know that also. What’s evaded the history of the Jags, really, has been a franchise quarterback. We have the ability now to make a choice, and it’s going to define the franchise moving forward.”

Of course, Khan probably won’t have to think too hard about the No. 1 overall pick. The Jaguars are almost certain to select Clemson superstar Trevor Lawrence, who may be the best draft-eligible quarterback since Andrew Luck. Lawrence, to the surprise of no one, officially declared earlier this week.

43 comments on “Jaguars’ Shad Khan To Control Roster, No. 1 Pick”