Veteran NFL wide receivers coach Ike Hilliard will have an opportunity to interview for a coordinator role. The Lions are bringing him in for an OC interview, according to SI.com’s Albert Breer (on Twitter). 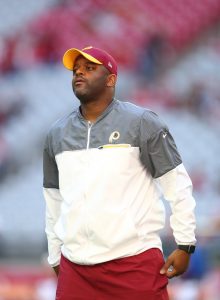 Hilliard just wrapped up his first season as the Steelers’ wide receivers coach. This will be the former NFL wideout’s first known interview for a coordinator position. Hilliard, 44, joins Ravens QBs coach James Urban as candidates for Detroit’s OC role.

The former Giants first-round wideout played 12 seasons, from 1997-2008 with the Giants and Buccaneers, and has coached receivers since 2011. His most notable role came as Washington’s wideouts coach from 2014-19. Under Hilliard, the Steelers unearthed yet another receiving prospect in Chase Claypool this season. Terry McLaurin also played under Hilliard as a rookie.

With the Lions hiring Dan Campbell as head coach, their next offensive coordinator will be the team’s play-caller. That obviously raises the stakes for the Lions’ interview process. It can be expected more names will join Urban and Hilliard in the franchise’s search.

3 comments on “Lions To Interview Ike Hilliard For OC Role”