Stafford Did Not Want Trade To Patriots?

Although the Lions employ several former Patriots, their centerpiece player is not believed to have wanted to travel the other way in this recently formed pipeline. 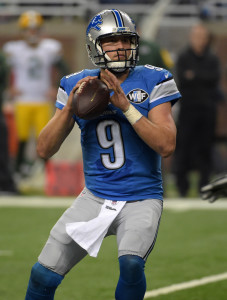 Matthew Stafford informed the Lions he did not want to be traded to the Patriots, according to Tom Curran of NBC Sports Boston. Other than a trade to New England, Stafford expressed flexibility about his destination, Curran adds. The Rams agreed to acquire the soon-to-be 33-year-old passer for a major haul Saturday night.

The Patriots were interested in acquiring Stafford, Michael Giardi of NFL.com notes. More than six teams sent the Lions offers for Stafford; it is unclear if any Pats-Lions talks progressed to that point.

While the Patriots are undisputedly this century’s most successful franchise and still employ arguably the greatest coach in NFL history in Bill Belichick, the team is low on intriguing skill-position players. Stafford is believed to have preferred a deal to Los Angeles, which presents usual recruiting advantages for free agents and trade candidates. In addition to those advantages, the Rams have two higher-end wideouts signed long-term and multiple promising young running backs.

New England does hold plenty of cap space, being projected to possess nearly $60MM — and that is if the NFL slots the cap at the previously determined $175MM floor. That could create an opportunity for the Pats, in an offseason when few teams will have considerable space. But they will need to look elsewhere for their quarterback answer, with Stafford bound for L.A.

58 comments on “Stafford Did Not Want Trade To Patriots?”