A day after Pete Carroll said Brian Schottenheimer would stay on as offensive coordinator, the Seahawks have reversed course. Schottenheimer is out after three seasons as Seattle’s OC, according to the team, which cited “philosophical differences.” 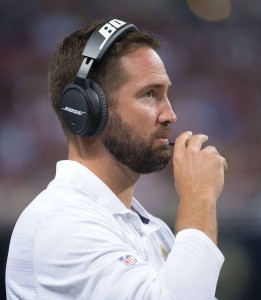 Carroll said Monday during an interview with 710 ESPN Seattle that Schottenheimer would be back next season (Twitter link via the Seattle Times’ Bob Condotta), but the franchise will instead look for his replacement.

Often criticized for overusing the run game, Schottenheimer nevertheless oversaw a season that saw Russell Wilson break the team’s single-season touchdown pass record (40) and D.K. Metcalf break Steve Largent‘s 35-year-old single-season receiving yardage record (1,303). The traditionally conservative Carroll attributed the Seahawks’ return to a run-oriented offense down the stretch as an effort to prevent turnovers. This came after Wilson struggled with interceptions during a midseason swoon. The Seahawks ranked 17th in total offense but eighth in points this season; they ranked top 10 in scoring during each of Schottenheimer’s three seasons calling plays.

Seattle was on a historic offensive pace (and a historically bad defensive pace) to start the season, turning Wilson loose in September and October. But he committed seven turnovers in losses to the Bills and Rams. After five 300-yard passing performances from Weeks 1-9, the ninth-year quarterback did not eclipse 270 yards in any game in the season’s second half. Schottenheimer’s firing comes after Wilson’s woeful 11-for-27 playoff outing, which included a pick-six on a wide receiver screen pass.

Schottenheimer, 47, has been an NFL OC for three teams — the Jets, Rams and Seahawks — and began that run in 2006. He stayed on during multiple Jets coaching regimes but was let go after the 2011 season. During his 12 seasons in charge of offenses, only one of them — the 2019 Seahawks — ranked in the top 10 in total yardage.

As for the next Seahawks OC, NFL.com’s Mike Garafolo throws out former Chargers play-caller Shane Steichen as a name under consideration (Twitter links). Despite the Chargers going through a coaching change, Steichen’s work with Justin Herbert should ensure he will see another play-calling opportunity soon.