Jason Licht talks to Tom Brady “often.” Their next convo could include contract extension discussions, the Buccaneers GM says. 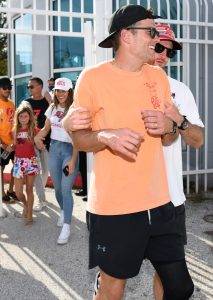 “It’s a possibility. He certainly didn’t look like he slowed down any this year,” Licht told Rich Eisen (Twitter link). “It appears that he had a really good time this year winning the Super Bowl…It’s a match made in heaven, so we’d like to keep this going.”

A Brady extension isn’t necessarily the team’s No. 1 priority, since the veteran is signed through the 2021 season. However, a new deal could allow the Buccaneers to retain more of their standout free agents and retool as necessary. This year’s out-of-contract group includes wide receivers Chris Godwin and Antonio Brown, tight end Rob Gronkowski, linebacker Lavonte David, defensive tackle Ndamukong Suh, and running back Leonard Fournette. Fortunately for the Bucs, Godwin seems willing to give a bit of a hometown discount.

“The goal obviously is to get paid, right? But, at the same time, I’m not stupid,” Godwin said recently. “I’m not going to put myself in a situation where I’m going to be miserable for some years to come just for a couple extra dollars. I think my happiness is paramount in all of this and part of that happiness is winning. Just having a bunch of different guys on the offensive side that can make your job a little bit easier but also give you the best chance to win is something that I’m strongly considering.”

Brady, who will turn 44 before Week 1, still says that he wants to play forever and ever. Meanwhile, he’ll undergo surgery to clean up a lingering knee injury that hampered him in 2020.

9 comments on “Bucs To Talk Extension With Tom Brady?”