Some have wondered whether Kenny Golladay could price his way out of Detroit this offseason. However, with weeks to go before free agency, Lions exec Chris Spielman tells WXYT-FM that Golladay — and the wide receiver position in general — is one of his very top priorities (via Dave Birkett of the Detroit Free Press). 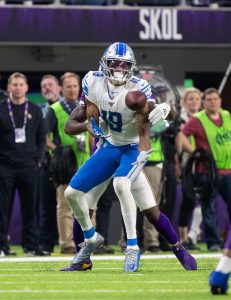 “I think Kenny is a, he’s a competitive guy and the thing that I’ve always admired most about Kenny when doing the games on TV is his ability to win the 50/50 ball,” said Spielman, an ex-linebacker and broadcaster who serves as one of the organization’s top executives. “I just think his size and what he can bring to the table is something that a lot of people liked about Kenny Golladay, including me.”

The Lions — like most teams this year – are facing a numbers crunch due to the anticipated salary cap decrease. As they rebuild for the near-term and long-term, Spielman says he’ll be looking at talent and character in equal measure.

“In any philosophy, you can fill in voids in free agency, but you can’t buy a locker room,” Spielman said. “That’s been a philosophy for a lot of teams. And generally, what I believe is that you want to build your team through the draft. So it’s kind of, draft, develop and re-sign. And I think that’s hopefully the direction that I think the Lions will take.”

When it comes to Golladay, the Lions figure to have lots of competition if/when he reaches the open market. The Giants, who are eyeing a major WR upgrade, are expected to be among his top suitors.