Dez Bryant wants to continue playing, but he doesn’t want to move forward with Baltimore. Recently, the wide receiver expressed frustration with the Ravens on social media and indicated that he’ll be heading elsewhere. 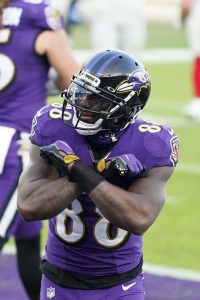 “I realized quick Baltimore wasn’t the place for me,” Bryant tweeted. “No bad blood. That’s their way of doing things so you gotta respect it.”

Bryant, who will turn 33 during the 2021 season, had a grand total of six grabs for 47 yards and two touchdowns for Baltimore. After a long layoff, Bryant was hardly featured in the Ravens’ offense across six games. No one expected Bryant to leapfrog Marquise Brown in the pecking order, but the longtime Cowboys star apparently hoped to be on a par with Miles Boykin and Willie Snead IV. He was not, and he feels that his lack of experience with the Ravens’ playbook played a role.

“My chemistry [with quarterback Lamar Jackson] was good on and off the field. But it was guys there before me who understood the offensive concepts better than me,” Bryant said. “You can’t jeopardize that.”

The Ravens seem to agree. Wanting to get younger at the position, the Ravens will allow Bryant to explore new opportunities in March.