Chiefs defensive coordinator Steve Spagnuolo is focused on winning yet another Super Bowl on Sunday. But, sometime in the future, Spags would like to be a head coach again. 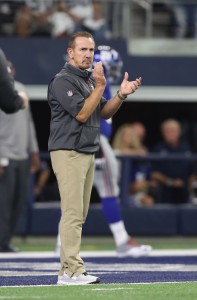 “I’d like to get another crack at a head-coaching job,” Spagnuolo said (via Paul Schwartz of the New York Post) “But…listen, I don’t stay up nights thinking about it.”

Spagnuolo, 61, served as the Rams’ head coach from 2009-2011. Unfortunately, his St. Louis teams combined to go 10-38 across three seasons. After that, he bounced around and returned to the Giants during the Ben McAdoo administration before joining up with old pal Andy Reid. Things have gone pretty well in KC, but Spagnuolo is still looking for a shot at redemption.

“I’m a competitor like anybody else,” Spagnuolo said. “It didn’t go as great as we wanted to in St. Louis, except for that one year. It’s a proving ground, the NFL is the greatest proving ground of all sports. So that part of it, I’d like another shot.”

Spagnuolo didn’t pop up in this past cycle, but he could garner attention next time around — especially if he’s able to keep a lid on Tom Brady this Sunday.

6 comments on “Steve Spagnuolo Hoping For Another Head Coaching Job”