Having bounced around the league in recent years, Malcolm Smith nevertheless generated some attention on the market after a notable showing in Cleveland last season. But he will stay in northeast Ohio. 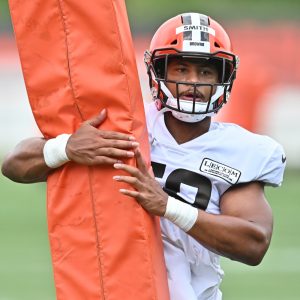 The Browns are expected to re-sign the veteran linebacker, Mike Garafolo of NFL.com tweets. The Panthers also expressed interest in Smith, but he will return to the Browns.

Cleveland acquired the former Super Bowl MVP just before last season. He played 52% of the Browns’ defensive snaps — his highest usage rate since his 2016 season with the Raiders — and made 72 tackles. The 31-year-old defender will now have a full offseason to work in Joe Woods’ scheme. Pro Football Focus graded Smith as the Browns’ best linebacker in 2020, slotting he and Sione Takitaki 15th and 16th among qualified off-ball ‘backers, respectively.

Since his four-year Seahawks run ended after the 2014 season, Smith has played for the Raiders, 49ers, Cowboys, Jaguars and Browns. The Dallas and Jacksonville stays did not last long, but Smith signed lucrative deals with both Bay Area teams. He used the Cleveland stay to revive his value to some degree, and the Browns will keep the veteran in place among a young group of linebackers.

Lavonte David hovered on Cleveland’s radar, but the standout talent opted to stay in Tampa. The Browns moved on, and Smith appears to have represented a proven fallback option. The Panthers have since agreed to terms with ex-Charger Denzel Perryman.

One comment on “Browns To Re-Sign LB Malcolm Smith”