The Cowboys have agreed to terms with free agent safety Damontae Kazee, as Ian Rapoport of NFL.com reports (via Twitter). Veteran NFL reporter Josina Anderson says it will be a one-year deal (Twitter link). 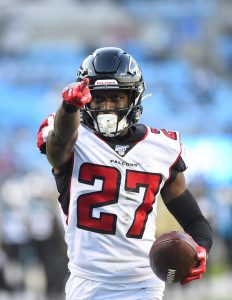 Kazee visited with Dallas yesterday, and even though he followed through on his plan to visit the Lions today, it didn’t take him long to strike an accord with the Cowboys. Michael Gehlken of the Dallas Morning News reports that the Cowboys’ medical staff was satisfied with Kazee’s recovery from the Achilles tear he suffered in October, and once he passed that test, Dallas was quick to extend a contract offer.

Dallas has been looking for a true free safety for a long time, and it hopes it has found what it’s looking for in the 27-year-old Kazee, whose 10 interceptions from 2018-19 were tied for the most in the NFL. The fit was a good one, as the Cowboys’ new defensive coordinator, Dan Quinn, was Kazee’s head coach for the first four years of his career in Atlanta, and secondary coach/pass game coordinator Joe Whitt Jr. was his position coach in 2020.

Kazee follows longtime Falcons teammate Keanu Neal from Atlanta to Dallas, so Quinn will have several familiar faces at his disposal. Interestingly, Kazee got his first real chance to start at safety due to Neal’s season-ending injury in early 2018, but Neal is expected to play some linebacker in Dallas, and Kazee clearly feels he will have enough snaps to re-establish himself as a ball-hawking playmaker in the defensive backfield.

In addition to Kazee, the Cowboys auditioned Jayron Kearse and Malik Hooker yesterday. The club ended up signing Kearse, and with Kazee now in the fold as well, Hooker will probably need to look elsewhere for his next opportunity.

On a related note, Ed Werder of ESPN.com says that Neal’s double-duty role as an LB/S hybrid could eat into linebacker Jaylon Smith‘s snaps, but that Smith’s roster spot is not in jeopardy (Twitter link). That jibes with a report that was published late last month.