Despite Tuesday’s roadblocks, the Giants have ironed things out with Kyle Rudolph. The former Vikings tight end inked his new deal with the G-Men on Wednesday morning (Twitter link via NFL.com’s Ian Rapoport). 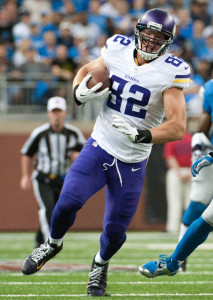 Rudolph first agreed to a two-year, $12MM deal last week. Then, a Giants physical yielded concerns about a foot issue that put surgery on the table. While it loomed possible that Rudolph’s reworked contract would have less in the way of guarantees or other added protections in the event of an injury, the Giants are honoring the original deal they agreed to with the veteran tight end, Mike Garafolo of NFL.com tweets.

Rudolph will undergo surgery this offseason, Garafolo adds, but he is expected to ready for action by the time the Giants begin the regular season. It is not certain if Rudolph will be full-go when training camp opens.

The 31-year-old marks yet another notable signing for the Giants, who have also landed star wide receiver Kenny Golladay and former Titans cornerback Adoree’ Jackson. Rudolph is now set to support top tight end Evan Engram as the Giants look to reignite their offense.