Michael Palardy has secured his first reported visit since getting dumped by the Panthers last month. ESPN’s Adam Schefter reports (via Twitter) that the veteran punter will be visiting the Bills tomorrow. 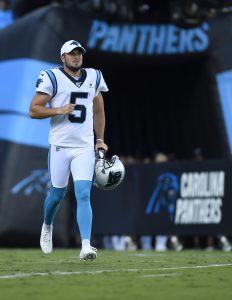 After bouncing around the league a bit to start his career, Palardy joined the Panthers back in 2016. He took on the full-time role in 2017, and he proceeded to appear in every game for Carolina over the next three years. However, the 28-year-old tore his ACL during the offseason, forcing him to miss the entire 2020 campaign. With one year remaining on his three-year, $7.52MM deal, the Panthers decided to save some cash and move on from the punter back in February.

Schefter notes that the punter is seven months removed from surgery and is expected to be ready for the regular season. Considering Palardy’s pedigree, it’s not a huge surprise that he’s already garnering interest from around the league. Plus, Bills GM Brandon Beane was in Carolina when the team initially signed the punter, so there’s some familiarity from that standpoint.

On the flip side, the Bills seemingly have a solution at punter in Corey Bojorquez. The 2018 undrafted free agent out of New Mexico has appeared in every game for Buffalo over the past two seasons, and despite the Bills finishing with a league-low 41 punters, Bojorquez managed to lead the NFL in average punt yardage (50.8). Bojorquez is set to hit restricted free agency this offseason, so the Bills are likely exploring their options before fully committing to the 24-year-old.