The Panthers are signing punter Michael Palardy to a three-year, $7.52MM contract extension, a source tells Tom Pelissero of NFL.com (on Twitter). The new deal keeps Palardy in place through 2021 and puts him in the top ten of punter compensation. 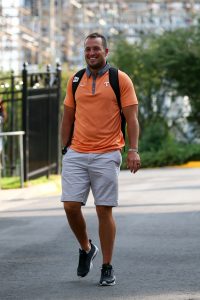 The deal, which includes a $2MM signing bonus, represents a big step up for Palardy. The punter was released by seven different teams before making his debut in 2016, so he’s undoubtedly appreciative of the new pact.

Palardy, 26, joined the Panthers in 2016 after Andy Lee was lost to injury. He has a career net average of 41.1 yards per boot and set the Panthers’ franchise record for single season net punting average last year.

The Panthers have cut punter Andy Lee, Joe Person of the Charlotte Observer tweets. That means they’ll be keeping Michael Palardy as their punter for the coming season.

The Panthers tried to orchestrate a trade for Lee this week, but it was to no avail. This time last year, the Panthers gave up a fourth-round choice to acquire him from the Browns. When he was dangled, the Cardinals expressed some level of interest, but it sounds like the Panthers could not extract anything of value from them. The Cardinals seem like a prime candidate to sign the veteran now that he’s a free agent.

The Panthers already paid $1MM to Lee in March and they’re still on the hook for his $1MM fully guaranteed base salary, so the punter will be on the books for $2MM in all, as Adam Caplan of ESPN.com tweets. It’s not a good look for Carolina, but the “new” regime did not want to saddle themselves with Dave Gettleman‘s mistake.

Lee, 35, had a perfect attendance record in the regular season through ten seasons before a hamstring injury sidelined him in 2016. For his career, he has three Pro Bowl nods and three first-team All-Pro selections.

The Panthers have placed punter Andy Lee on the injured reserve, reports Jourdan Rodrigue of The Charlotte Observer (via Twitter). The team has signed punter Michael Palardy to replace the Pro Bowler.

Lee injured his hamstring during Sunday’s loss to the Chiefs, and the veteran punter was unable to take the field during the second half. The 34-year-old has continued his reign as one of the league’s top punters in 2016. He’s averaged 49.1 yards per punt this season, good for fourth in the NFL. The 13-year veteran has also placed 18 punts inside the 20-yard line.

A sixth-round pick back in 2004, Lee was traded from the Browns to the Panthers this past offseason. Prior to his one season in Cleveland, Lee played 11 seasons with the 49ers, where he was a three-time Pro Bowler and three-time first-team All-Pro. Lee currently ranks ninth all-time in punting yards and 19th in punts. The punter is signed through the 2018 season.

Palardy, a 2014 undrafted free agent out of Tennessee, was in contention for the Panthers’ punting gig before the team traded for Lee. The 24-year-old has also spent time with the Browns and Falcons.