The Patriots have made another addition to their defensive line. NFL.com’s Ian Rapoport reports (via Twitter) that the Patriots have signed defensive lineman Henry Anderson. It will be a two-year deal worth $7MM, and it has a max value of $11MM based on achievable playtime incentives, per Rapoport (on Twitter). 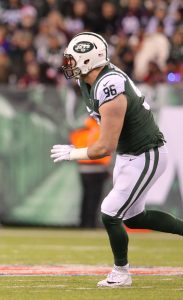 Following three seasons with the Colts, Anderson was traded to the Jets in 2018 for a seventh-round pick. He proceeded to have a career year during his first season in New York, compiling seven sacks. That performance earned him a new three-year, $25MM extension from the organization, but he had a tough time living up to that contract. Despite appearing in 29 games (21 starts) for the Jets between 2019 and 2020, Anderson collected only 1.5 sacks.

Thanks in part to the reduced production, it always seemed unlikely that Anderson would stick around for the entirety of his contract. The Jets ultimately moved on from the defensive lineman earlier this month, saving the organization more than $8MM.