Solomon Thomas is heading south. NFL.com’s Tom Pelissero reports (via Twitter) that the free agent defensive lineman is signing with the Raiders. It will be a one-year deal worth up to $5MM. 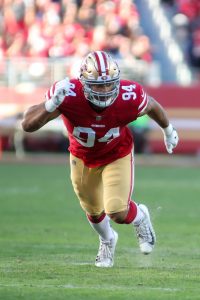 The 2017 third-overall pick out of Stanford never lived up to his draft billing during his four years with the 49ers. He started 25 games through his first two seasons in the NFL, collecting 13 tackles for loss, 17 QB hits, and four sacks. However, he settled into more of a backup role in 2019, finishing the year with two sacks in 16 games (three starts). Thomas also appeared in each of the 49ers three playoff games that season, compiling four tackles and one sack.

The 49ers declined Thomas’s fifth-year option last offseason, paving the way for a potential contract-year breakout in 2020. Thomas started each of San Francisco’s first two games, but he was limited to only a pair of tackles. He tore his ACL during the 49ers’ Week 2 win over the Jets, ending his season early.

The Raiders have been busy adding to their defense this week, agreeing to terms on a two-year deal with linebacker Yannick Ngakoue, re-signing defensive tackle Johnathan Hankins, and re-signing linebacker Nicholas Morrow. We learned earlier today that the team was also set to host free agent defensive lineman Quinton Jefferson.