Kenny Golladay is still on the market, but things could be heating up. The Ravens have reached out to the Lions’ free agent receiver, as Adam Schefter of ESPN.com tweets. 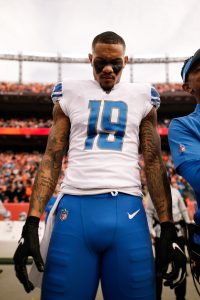 Hamstring and hip injuries limited Golladay to just five games last year. But, in 2019, Golladay averaged an NFL-high 18.3 yards per catch, and that was without Matthew Stafford in the lineup for much of that season.

The Bears met with Golladay on Wednesday night, despite having deployed the franchise tag on Allen Robinson. The standout wide receiver also talked to the Giants, though it’s not clear if head coach Joe Judge is on board given Golladay’s clashes with coaches in Detroit. The Bengals were said to have submitted an offer recently too, but things have been oddly quiet for one of this year’s top free agents.

The Ravens’ offense is largely anchored by the ground game, but Golladay would give Lamar Jackson & Co. a bonafide deep threat. Even if Jackson isn’t the most accurate passer in the league, Golladay has the wingspan and catch radius to make up for it.

Of course, it’s possible that these talks were more exploratory than anything. It would behoove Golladay’s camp to play up the Baltimore talk – perhaps in an effort to eek more money out of the Giants.