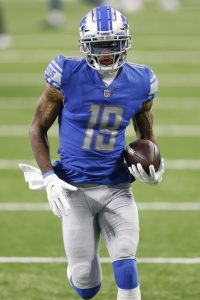 Other teams are in on Golladay as well, per Russini, but he does intend to visit New York to meet with Giants brass. The Bengals just saw A.J. Green defect to the Cardinals, but the team also is fairly well positioned at receiver.

The Bengals’ offer does not appear to have moved the needle for Golladay. Cincinnati proposed what Albert Breer of SI.com characterizes as a one-year, “prove it”-type contract (Twitter link). While Golladay may circle back to the Bengals, he will continue his free agency process.

Cincinnati received a quality glimpse of Tee Higgins‘ potential last season, and Tyler Boyd is signed long-term. Green played on an $18MM franchise tag last season, opening a spot for Golladay to work with Joe Burrow. The Bengals have used a few high picks on receivers in recent years, from Higgins to Boyd to John Ross. The latter, a top-10 pick, agreed to terms with the Giants this week.

Although the Bengals are not traditionally a team known for big offseason spending, they deviated from their usual course last year by signing a few big-ticket free agents. Golladay is coming off a season in which hamstring and hip maladies limited him to five games, but the two-time 1,000-yard receiver would certainly qualify as a splashy addition. With the Giants in the running and the Dolphins being linked to the four-year veteran before the market opened, this signing will not come cheap.