Ryan Fitzpatrick is heading to Washington. The veteran quarterback has reached an agreement with Washington, reports ESPN’s Adam Schefter (via Twitter). It’s a one-year deal worth $10MM, but the deal could grow to $12MM with incentives. 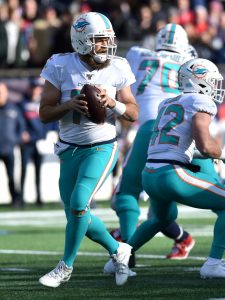 Despite having turned 38 years old in November and completing his 16th NFL season, it never really looked like the veteran was going to hang up his cleats. We heard earlier this week that Fitzpatrick intended to play in 2021, and it sounded like the quarterback would have plenty of suitors.

“For me, personally, I have to take every offseason and reassess,” Fitzpatrick said recently. “These last two years have really re-lit that fire under me. I still want to play, and I enjoy being out there playing.”

Those past two years saw Fitzmagic lead the Dolphins to a 9-11 record in his 20 starts with the organization. He completed 64.2-percent of his passes over those two campaigns, throwing for 5,620 yards, 33 touchdowns, and 21 interceptions. He also continued to produce on the ground, finishing with 150 rushing yards for the 10th time in the past 13 seasons.

Washington was looking for a quarterback after letting go of Alex Smith earlier this month. The team entered the offseason rostering both Taylor Heinicke and Kyle Allen.