A report earlier this offseason indicated the Dolphins wanted to add a boundary wide receiver and a slot target. The team checked off the first of those boxes by signing Will Fuller and may be preparing to finish this mission in Round 1. 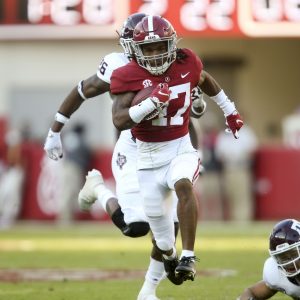 Rumblings of another Dolphins trade-down maneuver have surfaced, with the team appearing open to moving down again — perhaps if another team wants to fork over major assets for a quarterback. The Dolphins would be put to a decision in this case, because they may not want to move down too far. The team would not mind ending up with one of the two Alabama wide receivers — DeVonta Smith and Jaylen Waddle — if Kyle Pitts and Ja’Marr Chase are not available, according to the Miami Herald’s Barry Jackson.

Both Pitts and Chase be gone by the time the Dolphins go on the clock at No. 6. The Bengals continue to be linked to Chase at No. 5. If Pitts is still there at 6, the Dolphins should be expected to draft him, Ian Rapoport of NFL.com notes (video link). But if the Dolphins believe they can land Smith or Waddle a bit later than 6, the right offer could prompt the team to pull the trigger on a trade before the draft.

Should both the Alabama prospects be available whenever the Dolphins’ first pick ends up, Albert Breer of SI.com notes the team is believed to be high on Waddle.

Miami acquired a bounty from San Francisco late last month, collecting the No. 12 pick, two future first-rounders and a 2021 third for the No. 3 selection. The Dolphins may be preparing to capitalize on another quarterback-needy team. A team like the Broncos, who hold pick No. 9 and have discussed moving up, may be a fit for another Dolphins trade-down maneuver. Mel Kiper and Todd McShay’s latest ESPN mock draft has Waddle and Smith falling to the Nos. 11 and 12 spots.

Climbing back from 12 to 6, however, via the trade with the Eagles seemingly indicates the Dolphins want to equip Tua Tagovailoa with another weapon. Tagovailoa played with Smith and Waddle at Alabama; each of his former Crimson Tide teammates would be a major upgrade for the Dolphins and would join Fuller and DeVante Parker in a formidable receiver group.