Falcons GM: “We Have To Listen” To Julio Jones Offers

Earlier this week, we learned that the Falcons have been receiving trade inquiries on Julio Jones. When asked about the possibility of trading the star wide receiver, Falcons GM Terry Fontenot didn’t rule it out. 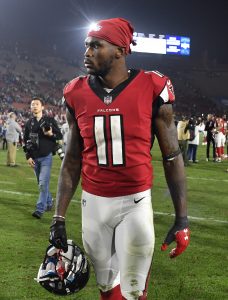 “That’s one of those things when you’re doing things the right way as an organization, you have to listen if people call on any player,” Fontenot told Justin Felder of FOX 5 (Twitter link). “We are in a difficult cap situation. That’s just the circumstance…Our administration has done an excellent job up to this point getting us in position to be able to manage the cap. Yet, we still have more work to do.”

Jones, 32, is still a difference maker when he’s healthy and on the field, though he missed roughly half of the 2020 season due to hamstring issues. Now, the Falcons have an opportunity to give themselves some breathing room on the cap by trading Jones sometime after June 1. It’s not clear which teams have called on Jones, though Peter King of NBC Sports speculated that the Patriots, Titans, Ravens, and Raiders could be among the suitors.

6 comments on “Falcons GM: “We Have To Listen” To Julio Jones Offers”