No surprise on this one. The Packers are expected to pick up the fifth-year option on cornerback Jaire Alexander, general manager Brian Gutekunst told reporters (via ESPN’s Rob Demovsky on Twitter). 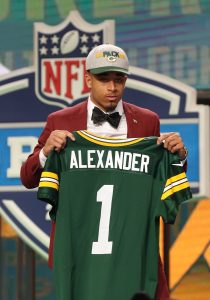 As the reporter notes, the only question is if the team can sign their All-Pro to a contract extension. Alexander’s fifth-year option is valued at $13.294MM thanks to him making the Pro Bowl in 2020, and the defensive back will surely see a pay raise (along with long-term security) in any extension.

Alexander, the 18th-overall pick in the 2018 draft, was more than solid through his first two years in the NFL, including a 2018 campaign where he received All-Rookie team honors. The cornerback started earning some league-wide accolades in 2020, including a Pro Bowl nod and second-team All-Pro recognition. The 24-year-old ultimately finished the campaign having compiled 51 tackles, 13 passes defended, one interception, one sack, and one forced fumble in 15 starts. He also came up big during the postseason, snagging a pair of interceptions in two games.

The Packers have been busy retaining their cornerbacks corps this offseaosn. They re-signed starter Kevin King, and they also brought back restricted free agent Chandon Sullivan. This trio will join former second-rounder Josh Jackson and perhaps a rookie on the Packers depth chart.