Washington is committing to Daron Payne for the 2022 season. The team has exercised the fifth-year option on the defensive tackle, reports Nicki Jhabvala of the Washington Post (via Twitter). The option is valued at $8.529MM. 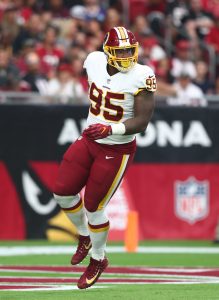 The former 13th-overall pick started all 16 games and earned All-Rookie Team honors in 2018, but he had an up-and-down sophomore campaign in 2019, starting only nine of his 15 contests. He rebounded this past year, starting all 16 games and finishing with 54 tackles, three sacks, and three forced fumbles. Payne was also a standout during Washington’s playoff loss to the Buccaneers, finishing with a pair of sacks and a forced fumble.