The Jaguars kicked off the second round by drafting cornerback Tyson Campbell from Georgia. 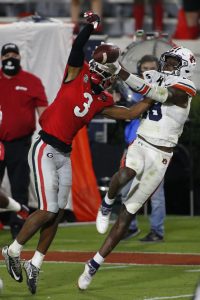 After taking Clemson stars Trevor Lawrence and Travis Etienne on Day 1, the Jaguars entered Round 2 with cornerback, offensive line, defensive line, and tight end as their most pressing needs. They opted to bolster the secondary. Campbell will now join a very young cornerback group in Jacksonville that has a lot of potential. The Jags just drafted C.J. Henderson ninth overall last year.

Just a few short years ago the Jaguars had a dynamic cornerback duo with Jalen Ramsey and A.J. Bouye, and they’re looking to rebuild that. They also signed Shaquill Griffin away from the Seahawks with a big contract in free agency, so the position has the chance to soon be a strength again.

Plenty of people thought Campbell would go in the first-round, and NFL.com’s Daniel Jeremiah had him going 28th to the Saints in his final mock draft. Campbell became a starter as a true freshman at Georgia, and is seen as having strong physical tools. He had 20 tackles, 2.5 for a loss, an interception, and five passes defended in ten games last year.