The Cardinals are waiting to hear whether Larry Fitzgerald will play in 2021. But, in the interim, his retirement decision will not impact the team’s board in this week’s draft, GM Steve Keim says. 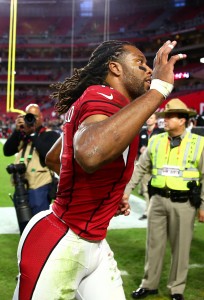 “No matter what Larry decides, it does not affect our draft plans,” Keim said (via ESPN.com). “Again, to me, you can’t have enough good players at one position. There [are] guys on a one-year contract. So, again, as far as building your team and the type of depth that you have, you can never have enough good players and, obviously, Larry Fitzgerald is a great one, so you wouldn’t say no to him either.”

The 37-year-old hasn’t tipped his hand to anyone — including Keim. Technically speaking, Fitzgerald is a free agent, but it’s believed that he’ll either return to the Cardinals or call it a career. For what it’s worth, executives “anticipate” that Fitzgerald is going to retire.

Either way, the Cardinals have to start thinking about the future of the position beyond Fitzgerald, who turns 38 in August. With that in mind, Keim anticipates that there will be five or six receivers taken in Round 1, which would leave plenty of quality options for them at No. 16 overall.