The Panthers have picked up D.J. Moore‘s option (Twitter link via NFL.com’s Ian Rapoport). The wide receiver is now under contract for the 2022 season at a guaranteed salary of $11.116MM. 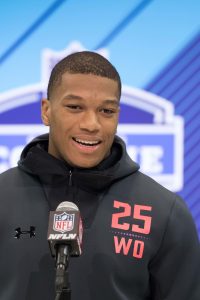 This was the expected move, given Moore’s steady improvement across the last three years. In total, Moore has 208 catches, 3,156 receiving yards, and ten touchdowns across 46 career games. Last year, Moore managed 66 receptions for 1,193 yards (18.1 yards per catch) and four touchdowns in an otherwise turbulent year for Carolina.

Moore, the former No. 26 overall pick, now has fiscal security beyond the ’22 season. The same can’t be said for quarterback Sam Darnold — the No. 3 pick in the 2018 class. At least, not yet. The Panthers have until May 3rd to decide on the ex-Jet’s future, so they’ll likely hold off until after this weekend’s draft. Tonight, a first-round QB is very much in play for them at No. 8 overall.

Ohio State’s Justin Fields could be one option, but they could also target Alabama’s DeVonta Smith or Jaylen Waddle to potentially supplant Robby Anderson in 2022.