Darious Williams is re-signing with the Rams. The restricted free agent signed his first-round tender today, the team announced on Twitter. This locks the cornerback into a $4.77MM price tag for next season. 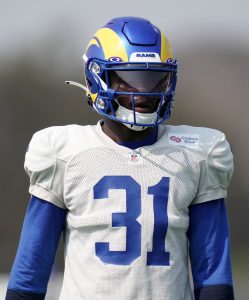 The cash-strapped Rams raised a few eyebrows when they extended Williams a first-round tender, making him the only RFA who was tendered at that value. Teams rarely use the Round 1 tender, but the team clearly wanted to ensure that Williams stuck around opposite Jalen Ramsey next season. Had another team signed Williams to an offer sheet, they would have had to sacrifice a first-round pick to the Rams. Williams’ deadline to sign an offer sheet was this Friday.

After taking on a larger role as a backup in 2019, Williams had a breakout season in 2020. The 27-year-old finished the campaign having set career-highs across the board, including tackles (44), interceptions (four), and passes defended (14). He ultimately ranked as Pro Football Focus’ No. 4 overall cornerback.

The Rams cornerbacks corps is set to look a bit different next season; Troy Hill left for Cleveland, while cornerbacks coach Aubrey Pleasant went to Detroit.