The Ravens have agreed to trade Orlando Brown to the Chiefs (Twitter link via Ian Rapoport and Mike Garafolo of NFL.com). As a part of the deal, the Ravens will receive the Chiefs’ No. 31 overall choice in next week’s draft while sending their No. 58 pick to KC along with Brown. 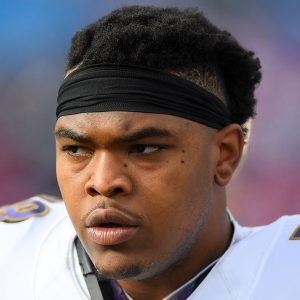 Brown, a 2018 third-round choice, moved from right tackle to left tackle last year to fill in for Ronnie Stanley. After turning in a strong year at LT, Brown told the Ravens that he didn’t want to go back to the other side. The Ravens have kept mum on the situation, but they’ve been listening on offers for the last few months.

The difference between left tackle and right tackle can amount to tens of millions of dollars over the long run. However, the Oklahoma product says his preference stemmed from his late father’s wishes.

“He always told me, ‘Don’t settle for playing right tackle. Make sure that when it comes time and you get to every level, you’re playing left,” the younger Brown said recently.

It’s not immediately clear whether the Oklahoma product will receive a new contract from the Chiefs straight away. For now, he has one more year to go on his rookie deal. After that, the Chiefs will have the option of using the franchise tag to cuff him for 2022.

The Ravens are now armed with two first round picks — their original No. 27 plus the No. 31 pick. That should give them ample ammo to trade for a new tackle, though they may circle back to Alejandro Villanueva instead, allowing them to address other needs late in the first round. Ultimately, the Ravens were facing two major issues with Brown. 1. They couldn’t unseat Stanley to put him on the left side and 2. A top-of-the market deal for him would have created a serious numbers crunch down the road, especially with Lamar Jackson‘s upcoming payday.

Meanwhile, the Chiefs have scored a top-flight young blocker — one that’s far better than any of this year’s Tier 2 options. Brown will help to fill the void left by the departures of starting tackles Mitchell Schwartz and Eric Fisher, who were released for financial and health reasons. Now, the Chiefs project to have Brown, Joe Thuney, Kyle Long, Austin Blythe, and the returning Laurent Duvernay-Tardif up front.

Pro Football Focus has viewed Brown as a top-25 tackle in each of the past two seasons, so he’ll be seeking a contract to match. Stanley, Trent Williams, David Bakhtiari and Laremy Tunsil have all elevated the left tackle market, which means that Brown could aim for something just shy of $22MM annually. At minimum, Brown’s camp will likely open talks by asking for $18MM per annum — that’s how much leading right tackle Lane Johnson makes per year.