Matthew Stafford‘s contract runs through the 2022 season. The Rams managed to navigate the primary free agency period without reducing their new quarterback’s cap number, but they are interested in extending Stafford. 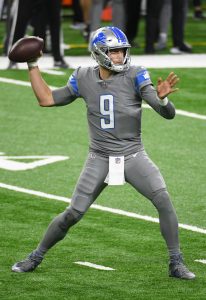 Les Snead provided a timeline for the team’s future with Stafford. Snead envisions the 2009 No. 1 overall pick playing for the Rams well beyond his current contract, which would make sense given the cost to acquire him — multiple future first-rounders and change. The 2021 season will be Stafford’s age-33 campaign.

“I don’t think we did it thinking two years,” Snead said of the trade during an appearance on The Athletic’s 11 Personnel podcast (via Rams Wire). “Based on his age, you can legitimately think five to seven, eight years if you look at what Drew (Brees) has done. I don’t know if we’re going to get into Tom Brady, right? Too many things going. But with quarterbacks of his pedigree, a lot of those guys have played into their late 30s, for sure. So that was definitely the vision with Matt.”

The Rams do not have modern experience deploying quarterbacks with Stafford’s experience. Under Snead, the team’s two primary passers — Sam Bradford and Jared Goff — did not last until age 28 with the team. Kurt Warner was out of St. Louis at 32, before his seventh NFL season. Stafford turned 33 earlier this year and has battled injuries in recent years. He missed eight games because of a back malady in 2019 — his first absences since 2011 — and detailed a few issues that bothered him last year. Stafford underwent thumb surgery recently.

Stafford’s recent injuries notwithstanding, the Rams are committed to the 12-year Lions starter. While Goff and Sean McVay‘s relationship progressively deteriorated last year, Snead insists the Rams did not want to jettison the former No. 1 overall pick for the sake of doing so. Stafford being available changed the equation.

“To do a move of that magnitude involving quarterbacks, specifically involving Jared, there definitely needed to be a Matthew Stafford on the other end,” Snead said. “We were not going to be stronger by moving Jared for a draft pick, per se. That wasn’t the case, and I think it did take someone of Matt Stafford’s pedigree, ability, experience, all those things, skill set to make that move.”