Shortly after any potential Browns-Aaron Rodgers rumors stopped in their tracks early, the ascending team will pass on the latest big name connected to a trade. 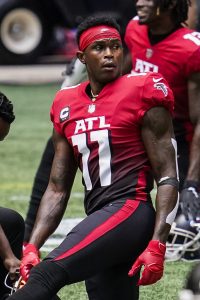 Cleveland is not interested in Julio Jones, according to the Cleveland Plain Dealer’s Mary Kay Cabot, who adds no Odell Beckham Jr.-for-Jones swap should be expected. Despite a rocky start in Ohio, which has involved trade rumblings, Beckham remains a player the Browns are high on. They are eager to see him back healthy in 2021, with Cabot adding the team has no plans to adjust its receiver room — which houses OBJ, Jarvis Landry and the recently re-signed Rashard Higgins — at this juncture.

While Cleveland did not profile as a Jones fit, Super Bowl aspirations notwithstanding, New England does. The Patriots have held internal discussions on the future Hall of Fame wideout, but the franchise known to make a splashy receiver trade from time to time may sit this one out. At this point, the Patriots’ interest in Jones is tepid, according to SI.com’s Albert Breer.

The Patriots reside in the top 10 in cap space ($15MM-plus), but they have not signed their top three draft picks. That will account for a few million. Though New England could move some funds around, the Falcons having a first-rounder on the table may change the equation for the Pats. Atlanta would surely prefer to send Jones to the AFC, but if an NFC team is the only one offering a first, that may well take precedence.

New England signed Nelson Agholor and Kendrick Bourne early in free agency, with Agholor collecting more guaranteed money than all but two 2021 UFA receivers (Kenny Golladay and Corey Davis). The Patriots clearly have big plans for the ex-Eagles and Raiders wideout, even though he has been inconsistent. Jones would certainly help Cam Newton and/or Mac Jones, but he does not have a no-trade clause. He may well be sent elsewhere.